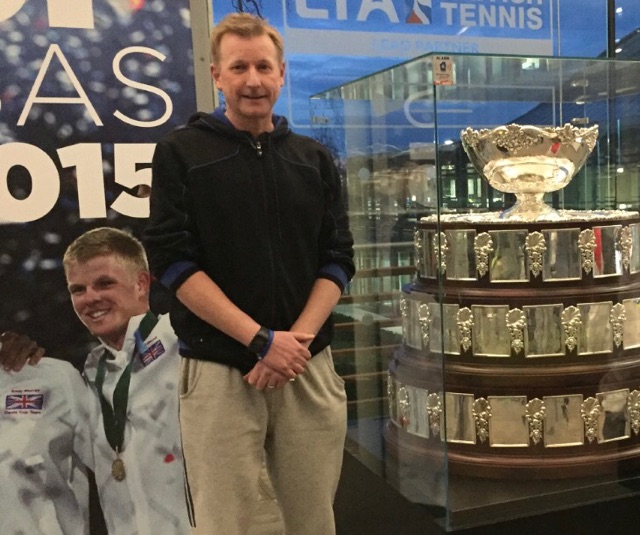 I first started playing tennis at the age of 11 and very quickly fell in love with the game. It took around 5 years to make any impact as a player. At the age of 16 I got my first invitation to county training and by 18 was representing Yorkshire at number 2 with a national ranking of around 40.
Whilst desperate to play full time, my parents thought it wise that I attend university for 3 years, so off I went (reluctantly) and gained a degree in “Materials Science & Engineering.”

4 months in to my course, I received a letter offering me a scholarship to an American University. Once I start something I have to complete it so turning this down was one of the toughest decisions I have ever had to make.
I loved representing my first club “Rawdon Golf and Lawn Tennis Club” and was very fortunate to be part of a very strong team that won 4 national team doubles titles.

After completing my degree, I suddenly found myself helping out a few young players at the club and soon enough I was on my way to becoming a level 5 coach. I spent 10 very enjoyable years at Ilkley developing their performance players and playing for the club in the national premier league.
Out of the blue I received a phone call from the LTA asking if I would consider heading up a coaching team in a place called “Thongsbridge.” I came to have a look and never looked back.

During my coaching career, I have worked with many players from beginners to national champions, captained many county cup teams and won national titles with players from Yorkshire including Kyle Edmund.
I’m very proud to work within one of the best coaching teams in the North of England where every day the aim is to improve all the players we see whatever the level or age. 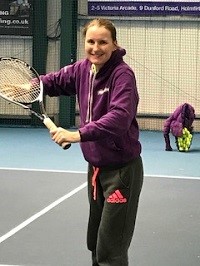 I have been coaching for 20 years in Yorkshire. I began after graduating from Leeds with a Geography degree when my temporary summer coaching job became full time at Otley Tennis Club. After several successful years building their club programme I moved over to Ilkley Tennis Club and joined up with Nick working in one of the biggest private members clubs in the North of England, including having a 7 year old Jonny Dow in one of the my squads and a lanky teenage Rob Jackson running about the courts!

My role at Thongsbridge is to head up the Mini Tennis Programme, together with the Schools Tennis Programme with particular emphasis on Talent Identification. Many of our top junior national players have come through tennis via this route. I am often out in the schools working with the 4-6year olds trying to engage them in the game and to see if we can find our next crop of county, regional, national and international players.

Up until last season I captained the Ladies National Aegon Team which has twice in recent years reached the National Finals and been one of the top 8 teams in the country. The Yorkshire League team which I captained and played in has also won division 1 recently.
At the club I am a member of the Junior Tennis Committee where we arrange and run various events for the juniors such as fun sponge ball tournaments, Easter Egg hunts, Tombola’s & Summer Tennis Trips.

I am heavily involved with Yorkshire Tennis being a counsellor and I sit on the Performance Sub Committee which involves attending meetings and advising on tennis issues.

I run the 12&U and 14&U girls county cup teams which are presently both National Champions and several of our top girl players have played in these teams – this role additionally involves taking county training squads which again many of our club’s players regularly attend.

Away from tennis I love being outside – either in the garden or out on the hills or seaside. I have a passion for travelling and exploring new places however remote – as long as it is hot! 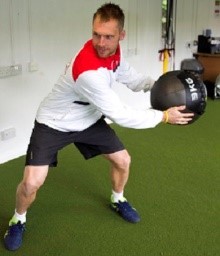 My tennis journey began later than most around the age of 11. I committed a lot of time to practice and would play with anyone, spending most of my weekends at the club playing practice sets or away at tournaments competing, I always loved competing and still do. Recently I have started playing for Yorkshire over 35 men’s team as well as representing Thongsbridge in the National Premier Winter League and Aegon Men’s Team Tennis and am really enjoying training again. The highlight of my career has to be playing doubles with Martina Hingis against Thongsbridge’s Nick Fitzpatrick and Former British number one Anne Keothavong in front of 2000 people at the Northern International held at Thongsbridge.

I began tennis coaching by assisting other coaches before starting my first LTA Coaching Qualification in 2000 and from there I continued to work up to level 4. Over the years I have helped the club evolve and been heavily involved with developing numerous county, national and international level players. I have also captained a number of junior Yorkshire teams from under 10 girls up to under 14 boys winning National finals 3 times and earning runners up medals twice.

In 2010, to aid the physical development of our tennis players, I decided to begin training as a strength and conditioning coach, completing an MSc in Strength and Conditioning at the university of Bolton and earning accreditation with the UK strength and conditioning association. The S&C programme has now grown, with 3 S&C coaches, and is an essential part of player development at Thongsbridge. To continue my development I have recently completed a course with the International Tennis Performance Association (ITPA) to become a Certified Tennis Performance Specialist, as continual personal development is very important to me.

More recently, to bring the tennis and fitness sections of the club together, the S&C team now manage the fitness side ensuring the members receive a high quality service that meets their individual goals from fitness classes to personal training. 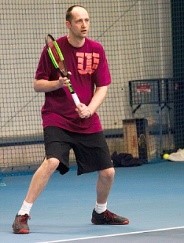 I first became interested in tennis at the age of 5 when I started lessons at Ilkley Tennis Club. I attended Ghyll Royd School in my junior days and then went onto Woodhouse Grove, where I studied for my GCSEs and A levels. I loved my sport at Woodhouse and went on to be captain of the Tennis, Squash and 2nd Team Rugby in my last year. After school I attended Leeds Metropolitan University where I achieved a degree in Leisure and Sports Management. Whilst studying at Leeds, I taught squash at the university and also at my old school, Woodhouse Grove. I then went on to join the coaching team at Thongsbridge Tennis Club in 2005. I run the Junior and Adult Programme as well as managing the club’s shop with Georgina Jackson and other bits and bobs behind the scenes.

I offer a racket re-stringing service which is available throughout the week. I also run the Tennis Box Leagues, which are open to all Thongsbridge Adult Tennis Members; Singles, Doubles and Mixed Leagues are available. Please speak to me if you would like to join one of these.

It has been said that I’m very approachable – a quality I’m proud to be labelled with. My teaching style is always to make lessons a thoroughly informative yet enjoyable experience. 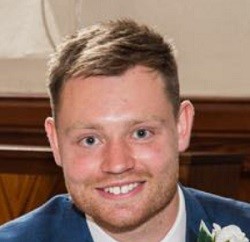 I attended Colne Valley High School and then went on to further my education at Greenhead College followed by Huddersfield University. I represented the schools and colleges in both football and tennis. I support both Huddersfield Town and Man Utd football clubs, and I play the occasional 5-a-side game in my spare time.

I grew up through the performance programme here at Thongsbridge Tennis & Fitness Club during the early 2000’s and went on to work behind both the bar and reception whilst studying and completing my education and qualifications. After obtaining a 2:1 degree in Sports Coaching and working at different tennis clubs to gain experience, I secured a position within the Thongsbridge coaching team in 2011.
Working alongside Rob Jackson and running the adult programme, I work hard to ensure new members settle in when they first join the club. I can guide and introduce them to existing members and the different levels of coaching on offer, which helps create a good social atmosphere and adds to the fun.

Working with the adults, juniors and mini tennis programme, my witty comments and bubbly personality are a big hit with members of all ages!! 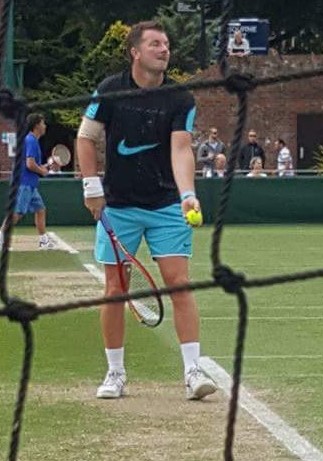 ABOUT ME
Having come from a family of teachers that all have a passion for sport, there seems little surprise that I have ended up seeking a profession that allows me to pass on my knowledge to others.

From a young age I have always enjoyed playing tennis. Growing up as a junior in the realms of the Calderdale League it wasn’t long before I was playing several times a week in performance squads held at Queens Tennis Club, Halifax. While studying A Levels at Greenhead College any opportunity was also taken to assist in leading coaching sessions at my local tennis club throughout the holidays.

It seemed a natural progression to go on to study a degree in Sport & Exercise Science at Loughborough University. Successfully representing the University in BUSA competitions while also assisting the Leicestershire County Development Programme which was based at the University was a definite highlight during this time.
Deciding on a future career in Secondary Education, I went on to complete a Post Graduate Certificate in Education before holding down a post at Thornton Grammar School, Bradford as a PE teacher for 16 years.

More recently I’ve been committed to supporting the journey of my two children who are both aspiring young tennis players heavily involved in the Junior tennis programme at Thongsbridge Tennis Club. In addition, I’m also proud to have represented the Yorkshire over 35 men as part of their County Cup team and still enjoy the occasional guest appearance for Thongsbridge in the Winter and Summer National Leagues. My involvement at Thongsbridge has continued to grow, initially offering hits in my spare time to many of the young performance players at the club. This has helped reignite my passion for working with individuals of all ages and ability who seek to maximise their own potential.

It is an absolute pleasure to be part of a team of coaches at Thongsbridge Tennis Club who all share this common goal! 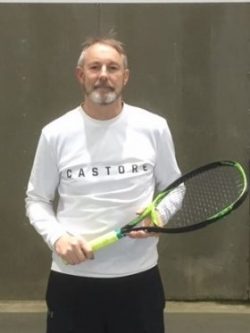 I took up Tennis at the age of 16 playing at Queen’s club in Halifax and at 21 moved to Middlesbrough to live and train full time at Tennis World working with current GB coach Richard Plews to improve my game.

At 23 I was invited to a training session at the prestigious Queen’s Club in London to train with Stephen Botfield, British No7 and Gary Engelmann, British No 10 both coached by David Haring & Tony Mitchell who was National Under 12, 14 and 16 Champion.

I then received sponsorship to the tune of £5000  having impressed David & Tony enough to go and live in London and train full time at the Queen’s club. This led me to compete in Switzerland in a satellite event.

During my training at Queens club I had the privilege to hit with Stefan Edberg former World No 1 and Wimbledon Champion and Christo Van Rensberg former World no 19 no 5 at Doubles. I practice and drill to a high intensity and have a great knowledge of the game.