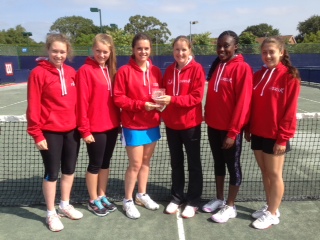 We arrived in Bournemouth to sunny skies and after a practice at the club on the Thursday late afternoon, we attended the draw and prize giving at the hotel. Here we received our trophy for winning the northern league, and then we were drawn out of the hat to face the top seeds Cumberland LTC in the quarter finals the following day.

This was always going to be a tough match as they had current WTA players to choose from plus a former world top 150 player and a junior Wimbledon competitor.

Holly was on first against Catherine Green a 4.1. In this match Holly played some outstanding tennis against an opponent who we knew on paper played far stronger than her rating suggested and had achieved some great results recently. Holly was able to get a 5-2 lead in the second set, by hitting some punishing shots and getting good length on her ground strokes, however her opponent upped her game and won 6-1 7-5.

Kim was next up against Harriet Dart, a 2.1 who had just won a junior grade one event, played at junior Wimbledon and had a junior world ranking of 58. Kim had her rattled in the first set, varying the pace, spin and placement of the ball, causing her opponent to get frustrated. However Harriet became more consistent in the second set, so winning 6-4,6-0.

Laura was up next against Naomi Cavaday a 1.1 rating and former world top 150 player. Laura fought well and there were many close games, but Naomi’s pace and spin on the ball was outstanding and she came through 6-1, 6-0.

Nicole was up against Anne Keothavong again a former world 47 player, rated 1.1 and had played in the main draw at Wimbledon this year. Nicole got off to a flyer and broke Anne to gain a lead in the first set. Nicole was making Anne work for every point, matching her for pace, but then the crucial points were beginning to go Anne’s way. The result was 6-4, 6-3 to Anne, but it was a close match where Nicole played some of her best tennis and was fearless against an experienced opponent.

On Saturday we play Virgin Active Brighton in what will be a more balanced match. Go Thongsbridge!!!

On the second day we played Virgin Active Brighton. On paper the players were of the same rating or higher, but we knew on our current form that we stood a good chance.

We were given a morning start, and with temperatures rising, Olivia and Holly were first on. Olivia was playing Elise Van Heuvelen – same rating, and who, when on form was hard to beat. The first set went the opponent’s way as she was able to dominate and hit many outright winners. Olivia felt her back twinge so we had an injury time out at the end of the set, and this unsettled her opponent. She found it hard to deal with Olivia’s reduced pace on her backhand and serve as she had less mobility, and her opponent started hitting one unforced error after another – so Olivia turned the match around to take it to a 3rd set match tiebreak. Elise was mentally broken and Olivia came through to win the breaker and seal the match.

Holly was up against Anna Woosley – higher rated than Holly, but we saw this as a winnable match. Holly got off to a flyer easily getting the first set 6-2, as Anna could not cope with Holly’s intensity and relentless groundstrokes. The second set was tighter but Holly came through 6-4, to give us a 2-0 lead.

Laura was next up against Kate Smith – an opponent with the same rating but whom we knew nothing about. Straight away we could tell from Kate’s body language that she was struggling with the heat, so Laura just had to stick to her game of not giving her opponent any cheap points, but to make her work for them. This game plan worked and Laura took the first set, however a wobble on Laura’s backhand in the second set gave it to Kate, so it was all down to the match tiebreak. Laura got herself back together, and she came through to win the match.

Nicole was then on against Natasha Khan – she was higher rated than Nicole but not as match tight. Nicole dominated from start to end only dropping one game, and came away with an easy victory.

Overall we finished in 5th equal position out of 8, which for a small club like ours is a massive achievement. Roll on next year and who knows!!!!!!

Finally a big thank you to the support of Tim and Ange – it’s a long journey, and thank you to all the team. A great experience! 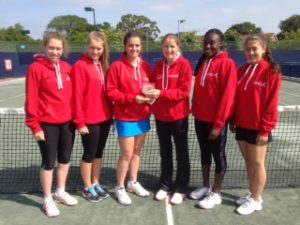 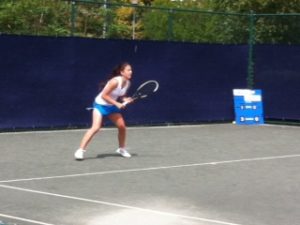 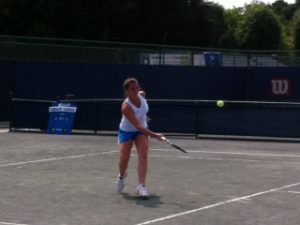 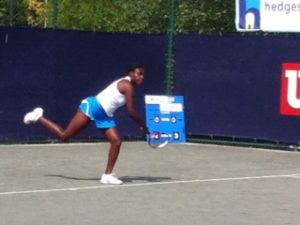