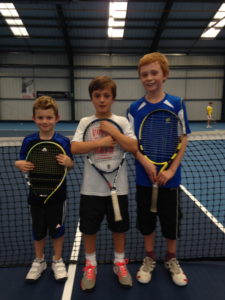 The last weekend in September saw the mini tennis closed club championship at the Thongsbridge Tennis Club. This year was no different to the previous years. Great entry of 47 boys and girls, all taking part in the various training programmes, competed in the 8U, 9U and 10U age groups. The youngest winner in the 8U category was Tommy Vale, overcoming Kieran Frost in a tight final. Dominic Vesely beat Alex Tikhonov in the 9U age group final to take the title, while the 10U group was won by Adam Boyle, defeating Jacob Chadwick in a long final finishing under the floodlights.
The junior committee put on a last of the season barbecue, taking advantage of the beautiful warm weather, so the parents and children alike could replenish their energy while watching the tennis. A great day for everyone. The winners will receive their trophies at the junior club night on the 23rd November.

September, the start of the winter season, is traditionally quiet on the competition front for the older age groups. Some children move up an age group at the start of September and life becomes much harder. A lot of the competitions are run by the LTA, with a pyramid starting at county level, progressing to regional level and finally to the national level for the best 16 in the country.

Ben Horner qualified for the 14U Winter Regional Tour in Hull on 5-6/10/13. He played very well in the first round, beating Ellis Corbet 6:3,6:1. Ben then came up against the eventual winner, Paul Jubb, in the quarter final. Ben had a slow start to the match, losing the first set 6:0, but he fought hard in the second and he nearly caused an upset, eventually losing 6:4.

Stephanie Carter competed at 16U Winter County Tour in Leeds the same weekend. Stephanie, despite having a prolonged rest from competition, put in a great performance. She beat Melissa Lowe in the first round in closely fought match tie break 10-8. She came up against Amy Hadjinicolau, a higher rated player, in the semifinal. The first set was tight, but Stephanie dominated the second and won 5:3, 4:1. The final was another close affair, Stephanie eventually losing 4:5,3:5.

Oliver Vesely moved up to 12U age group at the start of September. He competed in Ruthin County Tour event this weekend. He progressed comfortably to the final, where he narrowly lost to Matthew Cooper 4:1,3:5, (3:10) in a match tiebreak.