The latest round of the Winter Regional Tour tournaments for the 12U age group took place last weekend. Four boys from Thongsbridge Tennis Club qualified to play in the events.
Barney Fitzpatrick and Oliver Vesely travelled to Hull for the weekend. They both showed great form and they only lost one set and one tiebreak in eight matches between them. Barney beat Alexander Sultan de Souza from Kent 6:3,6:1 in the semi-final and the local boy Lewis Colledge 6:3,6:2 in the final.

Oliver had a slower start and lost his first match and went in to the consolation draw. He recovered well from his disappointment and went on to win the consolation draw, beating Marcus Macaulay from Scotland 6:3,7:5, Tom Davies from Cumbria 6:1,6:0 and Cameron Wood from Hull 6:1,6:0 in the final.

Matthis Ross had the furthest to go, he travelled all the way to Exeter to play his WRT. Matthis was the no 2 seed for the tournament and he proved he deserved the seeding. He battled through 2 matches on Saturday, setting up a tough semi-final against Matthew Harrison, no 4 seed, on Sunday. Matthis continued in his good form and his attacking style of tennis lead to 6:3,6:2 win. The same style of tennis and a cool head saw him take the final against the no 3 seed. Matthis played in his own words â€œthe best tennis of his lifeâ€.

Finn Murgett had the shortest journey to Birchwood Tennis Centre in Cheshire. Finn, the no 3 seed, beat Tom Nicol 6:3,3:6, 10-7 in a match tie break and Sam Morris 6:2,6:4 in the quarterfinal. Finn then faced the no 1 seed in Sunday’s semi-final. Despite his best effort Tom came on top 6:3,7:6, leaving Finn to play for 3-4th place in his last match against Harrison Birch. Finn managed to finish on a high beating Harrison 7:5,6:1. 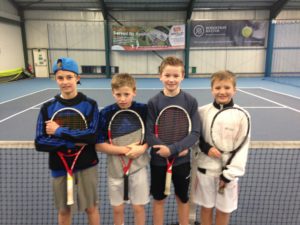