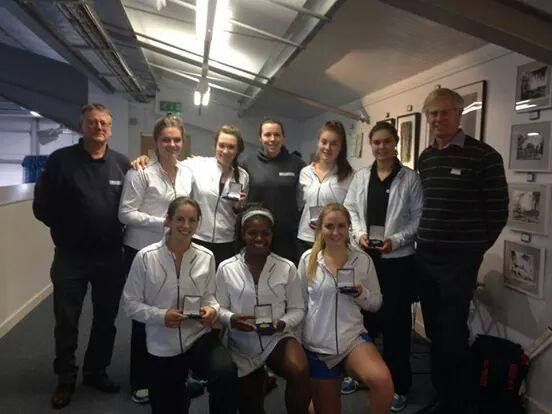 This weekend saw 4 of our members play for the Yorkshire Ladies’ County Team in Division 2a.
Kim Atkinson, Holly Horsfall, Olivia Noble and Sophie Dodds competed this weekend alongside 4 other Yorkshire Ladies including Katie O’Brien, a former British number 1!
The ladies began their weekend against Warwickshire. After 6 singles matches, 3 being won by Kim, Holly and Sophie, Yorkshire were tied at 3-3. Sophie and Olivia then teamed up and took the first doubles rubber. Yorkshire then went down in the next, levelling the match once again, so it was down to Thongsbridge’s Kim and Holly to play the final rubber. Yorkshire won the match convincingly 6-1, 6-0 beating Warwickshire 5-4 overall.
On Saturday, Yorkshire came across Nottinghamshire. After the singles, Yorkshire were up 5-1, with only 1 player dropping their match in a tight 3 setter. The 3 pairs then went on for the doubles, winning 2 out of 3, making it a very convincing 7-2 win, to give them the top spot after 2 days.
The final day and Yorkshire started top of the table. To secure a promotion back to Division 1, Yorkshire needed to win 5 of the 9 rubbers against Buckinghamshire. The morning started off a bit shaky, when Buckinghamshire took the first singles rubber in a 3 set match, 6-0, 2-6, 1-6. But that didn’t put the team off one bit. Next on court was Sophie Dodds, she levelled the scores after a convincing 6-0, 6-1 win. Holly Horsfall took to the stage as the number 4, again playing some top tennis to beat her Buckinghamshire opponent, 6-0, 6-3. Serena Nash, from Heaton, played as a strong number 3. Serena didn’t put a foot wrong and took her match 6-1, 6-0. Olivia Noble then stepped up and put Yorkshire ahead 4-1 with a 6-2, 6-2 victory. This meant Yorkshire only needed one more win to make sure they got that spot in division 1. Katie O’Brien was one that knew how to deal with pressure after having formally played as a professional, and so this match was one that she dealt with well. It was a tight couple of sets, that went with serve for most of the way, but Katie was able to get those couple of important breaks to take the match 6-4, 6-4. Yorkshire got their final rubber and promotion to Division 1.
Well done Yorkshire ladies and to Holly, Kim, Olivia and Sophie for your successful weekend! 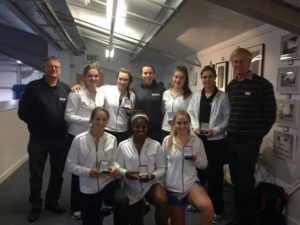 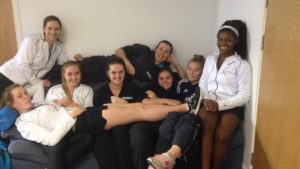