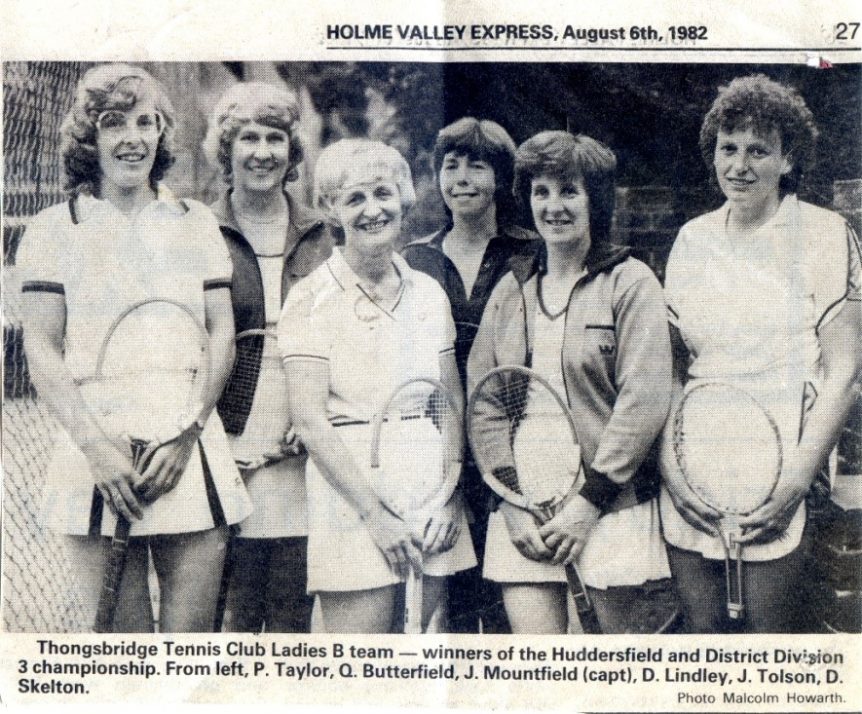 As time passes, more fund raising events are needed. A Cheese and wine Supper Dance at the Holmfirth Civic Hall makes a profit of £175 and a Fashion show a profit of £103.

A Ladies third team is formed, but too late for entry to the League, so friendly matches are arranged and it is decided that no longer will balls be provided for members.  Instead, match balls are for sale at 5p per ball.

Winter tennis can be played at Rastrick until Christmas and after that in the sports hall at Honley High School.  The initial quote for this is £32 but is reduced to £6.50 and congratulations are recorded to Graham Cooksey on this masterly achievement!

There are now 3 men’s and 3 ladies teams.  The 3rd Men’s play their matches at Honley School and the 3rd Ladies at Holmfith High.

Subscriptions are raised to £7 adults, £2 juniors.  This lessens the pressure on fundraising and brings more financial stability to the club. 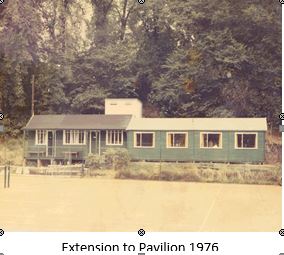 With the increase in membership numbers and teams it is decided that more courts are needed.  One court to the north will be bad for play so three extra courts are considered, and, most importantly, the land has to be purchased.  The quote for one court is £3835, and for three courts £9000.   An LTA loan of £1500 at 5% is negotiated.

April – there is a severe drought with a hosepipe ban resulting in the shale courts being in bad condition.  A decision is made that, if there is no rain, the nets will have to be taken down and no play allowed on the courts.

Committee members are on duty at club nights organising order of play, making coffee at 10p a cup, selling match balls at 15p each and trying to enforce the wearing of ‘tennis whites’.

Regional Officer of the Yorkshire and Humberside Sports Council visits with Barry Hobson, the Holme Valley Sports council Chairman, with a view to obtaining a grant.

We seek an extension of our lease, which has 28 years remaining, by another 30 years but, in order to obtain loans, ownership of the land is considered a necessity.

Below are two photographs taken in 1976 to celebrate the opening of the extension of the pavilion.  On the first one the then President of the club, Jean Mountfield, is standing on the far right.  Also present is John Stanley Taylor of Brook Dyeing Company, the land owners, who later assist the club in the purchase of the land.  The second shows a group of members outside with the shale court in front and the new toilet block just visible behind the pavilion. 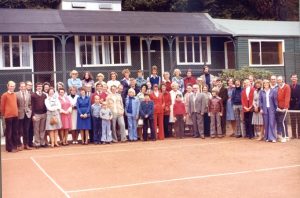 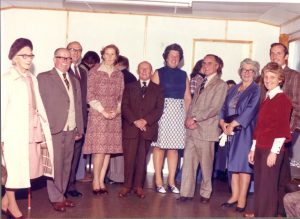 Do you recognise anyone?

Discussion takes place on a possible grant of £1500 from Holme Valley Parish Council but  nothing comes of it.  It is decided that the way forward is probably an LTA loan.

Amazingly seven teams are now producing more balls than can be sold to members and five dozen are sold to Greenhead School.

Profit making events include a Fork Luncheon which makes a  profit of £165, another Irene Gilpin Fashion Show which

brings in £9, a Barn Dance ‘one of the most enjoyable social occasions to date’- profit £117.

There is a record attendance at President’s day, and the total membership has risen to 211.

For Bonfire night £35 was spent on fireworks but the barbecue brought in a profit of £44.

What a story!  Hanging Heaton has been reprimanded by the League for playing a woman in a men’s team.

It is decided to enter a 4th ladies team into the League.

A form is sent to all members requesting help to fund the courts in three possible ways: 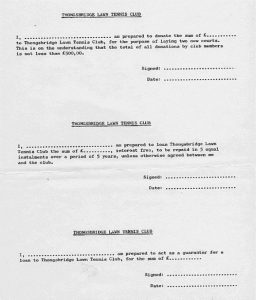 The results of this are outstanding with 48 members together gifting the club the sum of £705 and loans of over £700.

A loan from the NPF of £800 to be paid back over four years is obtained.

Balls from Slazenger have been obtained by the President, via a personal contact, at a discount of 70p/dozen

All appears to be going swimmingly except that Ariba Roti, our court builders, have gone into liquidation.  However a new company, Graham Thornton & Co., formed by a previous director, gives a new estimate of £6003. 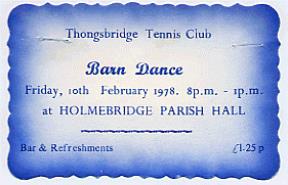 Match Fees now have to cover the cost of balls, the hire of courts and league fees and each ladies team

is to be responsible for the clubhouse for a three week period.

At the beginning of June work starts on new courts. 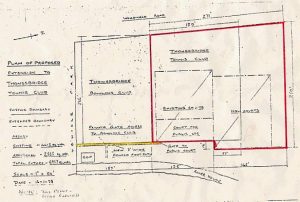 shown by the photo below.  Note the display of the wooden rackets. 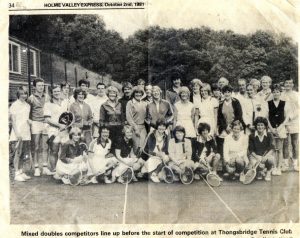 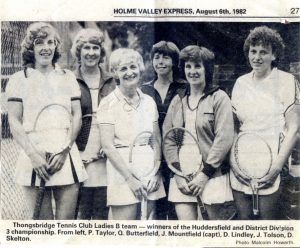 Were you a member of the ladies’ teams at this time?

Were you in this team that won the 3rd Division Championship?