Meet Louis Hull, 14U tennis junior and rising talent. Since picking up a racket at an early age, Louis has been working through the performance programme here at Thongsbridge for several years now. Coming from a tennis family, it probably felt natural for Louis to decide on this particular journey, but nothing comes without dedication and determination.
After working relentlessly to gain a ranking amongst the top 100, COVID hit and training as he knew it ceased. But a summer back on court, training and competing saw Louis re-enter the top 50 ranking for his age group, beating the 14U player ranked 15, to win the Yorkshire Championship 2021 final. His new aim? To break into the top 30!
However, right now, Louis has an even greater task, competing in his overseas Grade 2 Open to ensure his presence on the European radar. This is no easy task but gaining those first essential points to get a European ranking is essential for future Tennis Europe tournament qualification.
Not one to shy away from hard work, Louis has, this week, headed out to Sweden to compete in the Norrköping Elite Hotels Junior Open. Thankfully, Louis has a coaching dad, Paul Hull, so the company on the trip will be supportive on every level.
So, what’s the future for Louis? We asked him where he sees himself in a few years’ time:
“My shorter-term goal is to gain a higher ranking within my current age group and finish strong so that when the time comes for me to enter the 16U, I will be in a good place, feeling confident and technically sound.
“Longer term ambitions include the pathway to either Academy or US University scholarship programmes. It would mean so much to achieve this ambition, but I know the work ahead of me will be unforgiving at times. I’ll give it my all!” He says.
We wish Louis all the best in achieving his tennis and life goals, he’s made such an incredible start and proved an exceptional example to juniors just starting out on their own tennis journeys. Great work Louis. 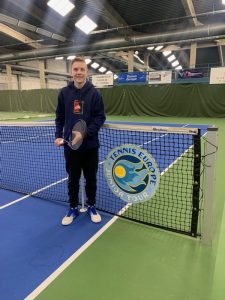