After being promoted last year to the National Open Division, this season our young ladies have taken the other teams by storm. Led by team captain Georgina, the ladies who have only lost 4 rubbers in the whole of the tournament, managed to knock out the favourites Holcombe Brook 1. This has put the team at the top of the table by a lead of 4 points after beating Rawdon, Holcombe Brook 2, Huddersfield and Wrexham.
Due to their fantastic success they will now be travelling down to Bournemouth where they will compete in the National Final against the top teams and players in the country. This event will take place over 3 days from Friday 12th July against world ranked players. The team will consist of team captain Georgina Jackson, Nicole Peterson, Emma Wilson, Kim Atkinson, Holly Horsfall, Olivia Noble and Laura Hopton. 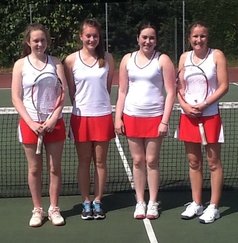 The last match at Wrexham