Last Saturday Thongsbridge Tennis Club was full to the rafters for the annual Junior Awards Night celebrating the achievements of its junior players. 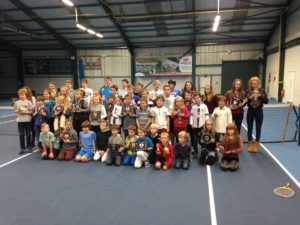 The club has a fantastic team of coaches who coach nearly 400 junior players in all age groups every week. Children start as young as 3 years old playing mini red tennis, progressing through the orange, green and onto full ball tennis when they turn 11. The tennis coaching programme caters for all abilities from children looking for some exercise, to serious competitors looking to replace Andy Murray as British number 1. The younger children start with a 40-minute group lesson per week. The older players who compete throughout the Country may train 10-15 hours a week, this includes individual lessons, group lessons and strength and conditioning. There were over 2000 matches played by our club players last year!

To add to all of these awards a number of our junior players received County Honours. Even more so, Holly Horsfall, Kim Atkinson, Barney Fitzpatrick, Oliver Vesely and Finn Murgett all received National Honours which is a massive achievement!

A huge congratulation to the Ladies Team in the Aegon Team Tennis, who came 5th nationally and were a team made up completely of junior players.

Thank you and well done to all of our players who compete in any of our competitions!