Eric Barlow, one of our long standing members, recently received a German made Focus Whistler Sport Series 26R 5.0 Mountain Bike, worth something between £350 – £400. Eric got the bike as a gift from the Wooldale Co-Op and was provided by Albion Cycles (off Miry Lane.) He has since donated the bike to the tennis club after claiming his age will stop him from getting out and about! The club are very grateful for the gift of such an impressive bike and will look to auction/raffle it off in the future! 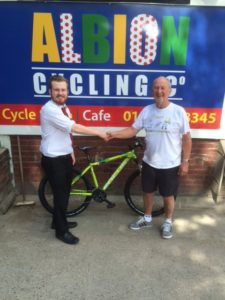 Eric Barlow receiving the bike from staff at Albion Cycling