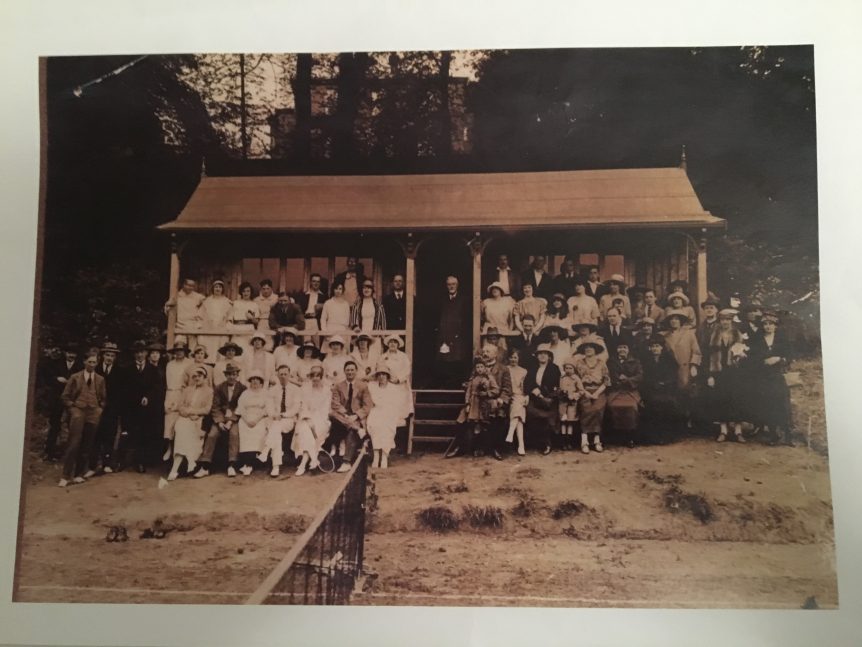 Celebrating 100 years of development at Thongsbridge Tennis and Fitness –

Chapter One – In the beginning …

1917 – Thongsbridge Lawn Tennis Club is first mentioned in Kelly’s West Riding Directory; this entry is next to Vickerman B. & Sons, owners of the Woollen Mill and the land. 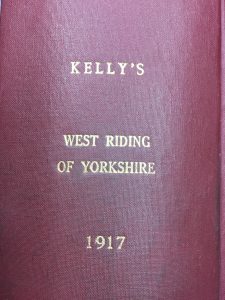 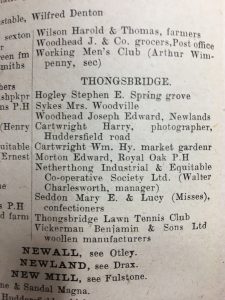 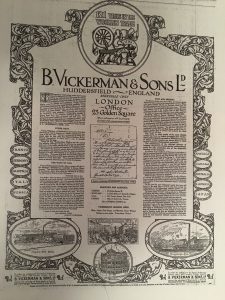 During the First World War there was a demand for cloth, not least to make uniforms. B. Vickerman & Sons also owned mills on Taylor Hill. The terraced cottages below St. Andrew’s Church in Thongsbridge, alongside the river, were known as Vickerman’s Row until very recent times.

The village of Thongsbridge had expanded in the early days of the industrial revolution
since its location within the steep-sided valley was ideal for water-powered textile mills.

Here is an early aerial photo of the site

1919 – a cashbook is started on 1 September –
payments include ground rent of 5 shillings to Vickerman’s;
a major payment of £80/-/- to H.F.Sykes and smaller payments 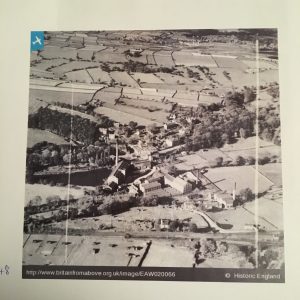 to Gamage Ltd, John Holmes & Sons and others.

Were these payments to do with the construction of a pavilion? 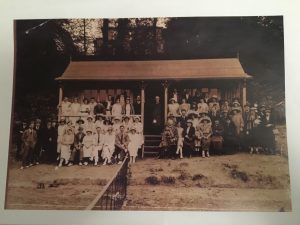 Do you remember/know how many pence in a shilling and how many shillings in a pound?
When did we change to decimilised currency?

Do you know what a guinea was worth? How much is one worth nowadays?
Social events and fundraisers are being held; there are 56 adult and 40 junior members.
Subs are £1/-/-d for adults and 12/6d (12 shillings and 6 pence) for juniors.

Donations are received from local people who are approached to be President, Vice-Presidents and Friends of the club, a practice that was commonplace and lasted a long time. Three such payments are for £5/0s/0d from Captain K Sykes; 1 guinea from Mr. Craigh and half a guinea from Mrs. J. Watkinson

1927 – the first minute book that the club still has in its possession; water is provided to the pavilion.

1928 – August – Vickermans allow a request for Sunday play, clarifying that it must be 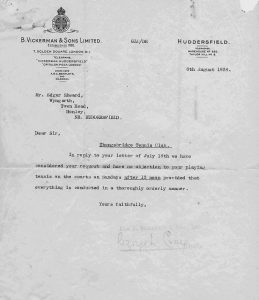 €œafter 12 noon, provided everything is conducted in a thoroughly orderly manner€!
You may wonder if this reflects the behaviour of the residents
of the Holme Valley at the time!

1929 – 18 April, General Meeting – a proposal to buy two new nets seems to confirm the existence of two grass courts.
June – at a committee meeting, R. Holmes, Chairman of the club, is appointed captain.
September – electricity is installed in the club house.
October – two dances draw in £35/5/-d (35 pounds and 5 shillings), resulting in an overall loss of 11/6d (11 shillings and 9 pence)

Matches are first mentioned v Honley, Armitage Bridge, Meltham and Holmbridge.
Drainage is a problem – rainwater from the roof of the pavilion drained into a barrel at the back – there is a proposal to construct a drain into the bank.

A request for use of the courts by girls of Holmfirth Secondary School is refused!