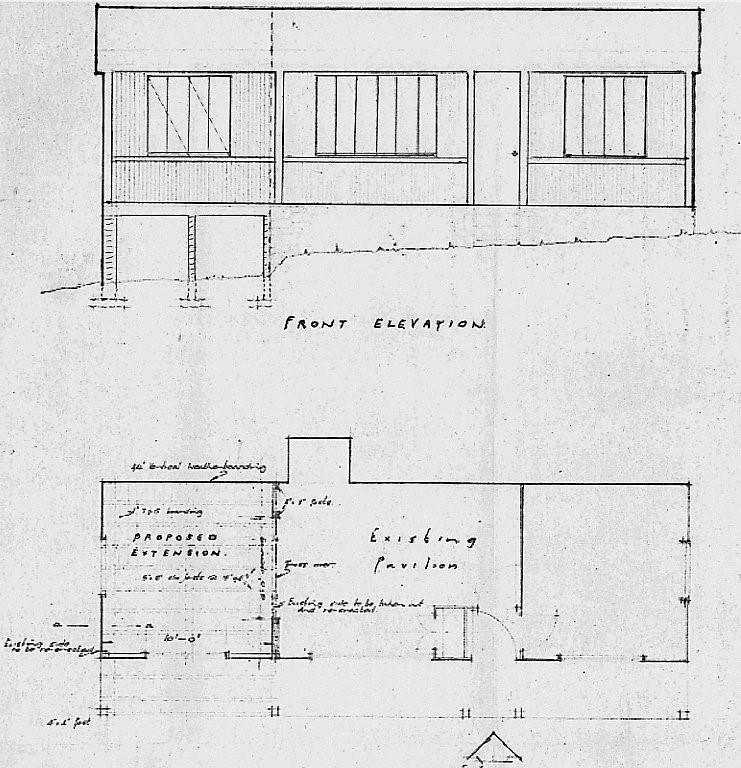 1954/55 – Hard work by the committee members, raising money with two dances per year plus a Christmas draw sees the clubs assets rise to nearly £300 by the beginning of –

1956 – whilst there is some expenditure on posts and nets, a whist drive, a bring and buy sale, a jumble sale and a raffle, as well as the two dances and Christmas draw, produce an extra £235 giving a total income of £630 and the banked money is still rising. 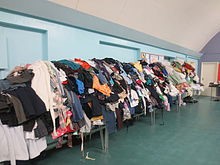 A letter is sent to Thongsbridge Mill Company about some trees on the land which is leased by the club. Experts are saying these are unsafe and, in addition, the club’s insurance does not cover ‘falling trees’. By the next meeting a reply gives permission ‘to do what you think best’.
During the playing season the grass courts are in poor condition but have to be left until the winter for re-seeding, etc. This is a continuing problem.
The committee are raising money for the specific intention of providing an extension to the pavilion.

1959 – By the start of the season there is £500 available and a builder, Mr A. Hinchliffe, is paid £159-10 for this work. The architect’s drawings, which are in the club’s possession, have been passed by the Holmfirth and Urban District Council in 1956.
They show access from within the pavilion and a window looking out onto the courts. The final product has a door from the verandah, and this becomes the men’s changing room. 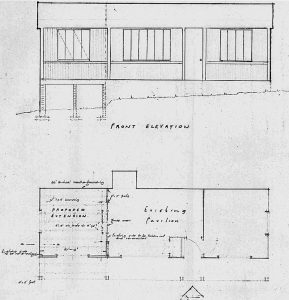 1960s – At the beginning of the sixties the grass courts are again a problem. The solution appears to be to convert the courts from grass to a hard, all weather surface.

1961 – By the end of the playing season, a quotation of £414-0-0 per court (£1225 for three) has been received from Conways. At the Committee meeting of September 21st, a decision is made to go ahead with the conversion of the third court (from the pavilion) to a grey granite finish. In addition to this work, the contractors level and patch the remaining two courts at no extra charge. Payment is to be 50% at the completion of the work and the remainder one year later, with no interest charge. Conways state that this new non-upkeep court will last nine or ten years and resurfacing will then cost a further £120.
A note reveals that the Annual League Dance is to be held at the Huddersfield Ritz on October 20th. Both the men’s and the ladies’ teams are to be presented with cups.

1962 – By the end of January, the new court is well under way. The grass has been removed, the surrounds laid and a base of ashes rolled in preparation for the hard surface. Cold weather delays its completion but, although there is no minute of the date of the opening of the new court, the first half of the cost is paid on October 3rd. Despite this, there are still assets amounting to over £300, and in –

1964 – the full cost of the court is paid by August.
For a number of years there have been complaints from members about the club’s toilet facilities. This consists of an Elsan (chemical) toilet in a small hut between the pavilion and the bowling Club. Not surprisingly, there are also problems with its emptying!
Does anyone remember using this and which Elsan model it was?!

1965 – it is decided to draw up plans for new toilets in the pavilion.
Perhaps more importantly, from the playing point of view, permission is sought from the landlord to allow play to take place on Sunday mornings. This is put aside for men’s practice and the men’s team certainly benefitted.

1966 – by March the plans for the new toilets have been passed by the Holmfirth Urban District Council. The estimates for the materials, including a septic tank, come to a total of £420. 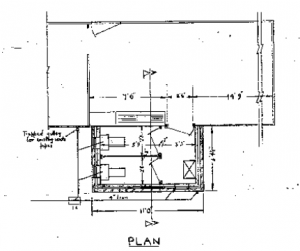 Unfortunately, at the committee meeting that month, it is decided that the club does not have the resources to meet these costs, and the idea is dropped.
It is to be another ten years before the Elsan is dispensed with.