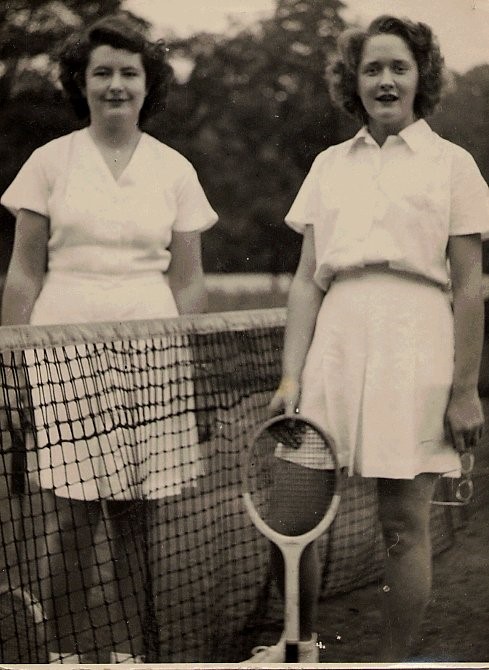 1947 – 7 May, a General Meeting is held to consider re-forming the club after the difficult times of World War 11. A proposal ‘that the club be re-formed and that the committee allow Holmfirth Services of Youth Club members to participate for that season with a subscription of five shillings’ is carried by 8 votes to 7.
A committee meeting follows at which the subscription is set at one guinea for seniors and 10/6 for juniors (later reduced to 7/6) with no entrance fee for that season. Members are to provide their own balls and there is a decision to buy 2 new nets. Holmfirth Urban District Council is contacted to replace the water meter and turn on the supply.
By July a Jumble sale has raised £30 and there has been discussion about affiliation to the Y.L.T.A but this is left for consideration in the 1948 season.

There is much discussion about junior members’ playing hours. Eventually it is decided that juniors can play in the evenings up to 7.00p.m. and until 2.00p.m. on Saturdays.

A match is arranged against Honley Southgate and a dance is booked at the Drill Hall for 27 September.
The dance makes a profit of £55-15-3. Total income reaches £200. The club is back in business!

1948 – the club has £144 in the bank. The season goes well with £80 paid in subscriptions but a huge amount is paid to H H Morley for ‘surrounds’. This, along with other expenditure, puts the club into a situation of having little or no resources.

1952 – for the first time the club becomes affiliated to the LTA.

Geoffrey Barber, Chairman at the time, confesses that this move is to enable members to get tickets to Wimbledon.

As we know, however, subsequent dealings with the LTA have brought much more than Wimbledon tickets. 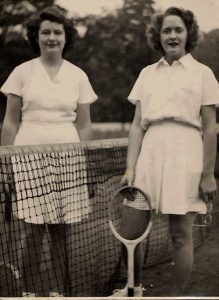 Among other key figures during this period of development are committee members Miss Sheila Mundy (later Mrs Edward Wagstaff) and Mrs P. Ackroyd, pictured here in their compulsory tennis whites.

The latter serves as treasurer from 1950-58, followed by Mrs B Hartley 1959-60. Stability is also provided by Margaret Gilling (Margaret Yates), secretary from 1950 to1960, alongside her father, Herbert Gilling, (pictured below with his wife), as Chairman until Geoffrey Barbour takes over in 1952. 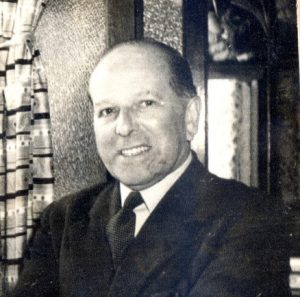 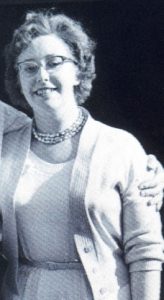 Do you know any of these people?
Do you know of others who got the club back on its feet after difficult times?

1953 – members’ payments remain stable and additional income from donations from Vice-presidents, plus tournament profits puts over £130 in the bank.
The committee meets every fortnight throughout the summer and some new members are recruited though others are lost for various reasons. Subs are reduced but a dance and a raffle together bring in £75 so that the club is still solvent to the tune of just under £100. Heady days!
Despite this, at a meeting in October, a ‘Ball Fee’ of 6d per person per match is introduced, to offset the increased cost of balls owing to membership of the Huddersfield league.
One member playing in the League is Kathleen Dyson. Having joined in 1955, she is probably currently the oldest surviving ex-member. The photo below is of her, still playing in the 1980s, and Shirley Stephens, by the court of Linthwaite tennis club,

Do you know these two?

Do you know others who played at this time?

One of the remarkable aspects of the club at this time, contributing to the friendly, family feel that is it’s hallmark, is that, if members are ill, flowers or fruit are sent to them. For weddings, there are telegrams such as the following sent to ‘Douglas and Sylvia’ on Whit Saturday

1959
€œGive tennis a miss, enjoy marital bliss
This love game is to your advantage
May all your faults be little ones€

1954 – at the AGM, there is some discussion about hard courts. The minutes reveal that ‘unless the members of the club are prepared to work for this it seems a very distant prospect’.