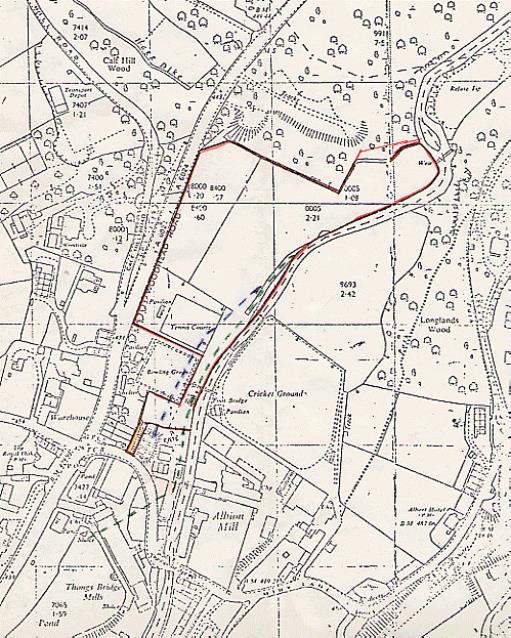 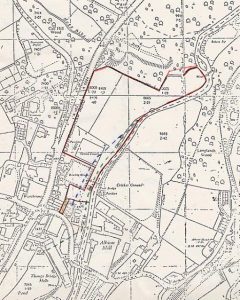 1984 – the Land Purchase is legalised by efforts from Peter Thornton and Lionel Barham, and a further grant of £1000 is obtained from the Sports Council. The extent of the land acquired is shown in the diagram and it is this vital purchase that allows the club to expand over the next 30+ years.
At the AGM in November, Chairman Brenda Lee remarks on the glorious weather throughout the summer which has made playing tennis even more enjoyable but made the groundsman’s job more difficult. The grounds committee is complimented on keeping the courts in very good condition despite the dry weather and hosepipe ban.

By the mid 80’s the club has an increasing number of teams in the Huddersfield League.

1986 – pictured right is one of the ladies’ teams, captained by Kathleen Dyson, who remembers the photograph being taken, at Newsome.

Do you recognise any of her team mates?
The men’s first team of Trevor Lodge, Ken Parkin, Peter Dean, Dave Allison, Peter Kelly and Graham Cooksey are promoted to the first Division of the Huddersfield League.

There has been the sad loss of Lawrence Myers, renowned for playing in odd socks and non-tennis clothing!

A tournament is named after him and the trophy is won two years in succession by Nola Hughes and Peter Kelly, pictured right.

1987 – in February, vandals cause damage to the pavilion.
Ten telegraph poles are obtained free of charge to use for floodlighting but the cabling needed in order to complete the improvement cannot be afforded at this time.

The Piscatorials have fishing rights in the culvert.
A cleaner is employed – Vera Carr. Do you remember her?
1988 – the ladies’ second team wins Division 3 of the Huddersfield League.

1989 – at Easter, we join an exclusive band of clubs to possess floodlit courts (2), thus paving the way for all-year round tennis. We have the highest number of teams in the Huddersfield League, 5 men’s and 5 ladies’, reflecting a thriving membership. Coaching for juniors, intermadiates and adults is operating on Saturday mornings, with Alan Hinchliffe and Roger Walker.

1991 – in July, Thongsbridge ‘B’ ladies become the first side to clinch a title in the Huddersfield League, putting together a run of 11 straight wins to return to Division 2 as champions for the second time in 3 years.

1992 – during the winter, the club has taken up the option of buying back from Holmfirth Parish Council the tarmac court which has been available to the public for 9 years as a condition of a council loan. This will enable the club to push ahead with the upgrading of all the courts.
The floodlighting is improved; membership is aroud 200 plus 100 juniors; ownership of the car park gives block membership to the bowling club bar.

1993 – the construction of an indoor facility, comprising of 2 courts, is completed. A coach is employed. 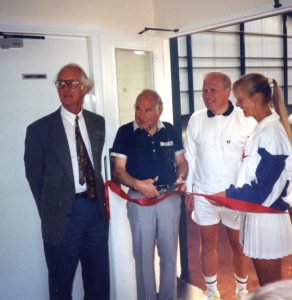 On President’s Day, Peter Thornton, President, cuts a red ribbon to open the first indoor courts. On his right is Edward Wagstaff, Chairman at the time, to his left Steve Hutton, who has put in an immense amount of work as development officer to get the project completed, and coach, Karen McLoughlin, Yorkshire champion in 1991 and a county and regional coach. She lands the job despite a late application from Australian coach Adrian Blackeby, who has worked at Thongsbridge the previous summer. Karen says: ‘It’s an exciting time for the area. You have to travel to places like Chapel Allerton, Sheffield and Ilkley to find a club with 2 indoor courts and the acrylic surface is the type the Europeans play on. But Thongsbridge is a grass-roots club and they don’t want to lose that friendly atmosphere. New members can turn up and feel very welcome.’

1994 – in June, French exchange juniors are allowed to play on the courts.

1995 – in February, all external doors are blocked by snow that has slipped from the roof.
Defects have been found in the court surfaces. According to the LTA technical adviser paint hasn’t properly bound to the surface.
As part of the development plan, the LTA encourages the club to plan to build 2 new clay courts with floodlights, by converting shale courts to continental clay, to provide a longer playing season. Conversion from the shale courts to add more acrylic courts has been rejected at this time.
The courts are used by Greenhead College for their A level course.

1996 – the Ladies First Team are champions of Division 1, ending the 10 year Huddersfield monopoly of the Division 1 title and completing the season with a 100% record of 14 wins. Can you tell us who is in this team?

A bid is made to the Lottery Sports Fund for 2 new courts.
Kirklees designates the river a ‘wild-life corridor’- courts are not to encroach on it.

1997 – the changing rooms now have shower cubicles which prompts the Chairman to declare that a jacuzzi will arrive in 2022!
In October, a grant of 30k is awarded from the Lottery Sports Fund for the clay court project. Whilst this project is rejected, it does, nevertheless, lead to other plans for greater development and expansion.
Over the next twenty years the club is indeed to make remarkable strides.
As in previous years, Brownies attend 6-7p.m. to complete their short tennis badge. Senior membership fees are now £88.

1998 – in April the club employs a head coach, Jason Collins.
There is a new Lottery application for 2 new floodlit clay courts and the resurfacing of the troublesome shale with clay.
In November, however, quotes are obtained instead for synthetic grass.

1999 – phased development is planned. At this time, it comprises –
Phase 1 – the resurfacing of the outdoor courts with floodlights for 2 of them
Phase 2 – 2 additional indoor courts

As the 20th century draws to a close, however, plans are drawn up to make a National Lottery bid for £1.4m to further develop the site by also building a new clubhouse incorporating a fitness suite and sports shop as well as indoor courts and social space. Improvements to the road and parking will be needed too.

Here is an artist’s impression of how it would look.
Targets for financial support include the LTA, the Foundation for Sports and the Arts, the Sports Council and major companies such as Donnay, Slazenger, Coca-Cola and Cadbury Schweppes.

The aim is to offer to the Holme Valley a sports and leisure complex designed to offer tennis all year round, with young, disabled and ethnic groups especially encouraged, and to reduce the idea of tennis as an ‘elitist’ sport.
Members of the development group responsible for this amazing scheme are chairman Alan Cockman, Mike Adams, Peter Swithenbank, Tony Johnson and coach Jason Collins.