The club had great success at the County Championships at the end of August. The juniors won 10 titles between them and there were plenty of notable performances! 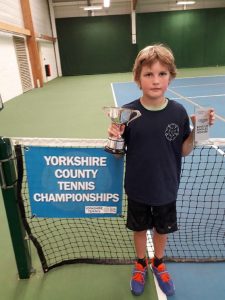 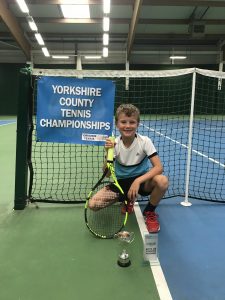 Barney had a fantastic week in Nottingham at the National Championships. Competing in the 16&U age group he made it all the way through to the finals in the singles, coming through some tough matches in the early rounds. Unfortunately in the final he was injured and had to retire after the first set, but this was still a huge achievement for him!

In the doubles Barney went one better and partnered up with Harry to win the event coming through 4 hard fought rounds – well done Barney!

Louis was the winner of the back draw finishing 9th out of 16 players! He lost a close first round match but then won his following 3 matches having to deal with some unpredictable weather and having a change of court surface. This capped a really great year for Louis on Green Ball!

Louis and Holly represented Yorkshire at the 9&Under county cup event at Sunderland in mid August. Yorkshire were completely dominant and Holly and Louis won all their matches – well done – you did the club and county proud!!