The Aegon 18 and under County Cup took place at 18 different venues all over Britain with Yorkshire boys & girls both competing in the top division (of 11 groups) in Bath. It was to be an epic weekend of tennis, finally resulting in Yorkshire claiming both titles for the first time since Surrey in 1998.

Yorkshire boys’ won the title for only the second time since the event has been running, the last time being in 1999. They did so in style with crushing 7-2 victories over Hertfordshire and Surrey, and, a war of the roses with Lancashire on the last day saw them 5-1 up after the six singles matches, negating the need for the 3 doubles matches.

The team was ably captained by Richard Crabtree, with Thongsbridge youngster Andrew Atkinson playing an integral role in the squad’s success. The other 7 squad members hailed from all over Yorkshire, and the boys all showed tremendous ability and team spirit to bring this coveted trophy back to Yorkshire.

The battle for the girls’ title was a close one, with Yorkshire edging out Middlesex, Hertfordshire and Buckinghamshire, but it was to be a nail-biter to the end! Day 1 saw a resounding 9-0 win over Buckinghamshire, but day 2 was tight, with a 5-4 win over Middlesex. The situation was so finely poised, that at the start of day 3, any of the top 3 teams could have claimed the title, or been relegated to the 2nd division (the bottom 2 teams being relegated). But the girls put in a gutsy performance, and although they narrowly lost to Hertfordshire, 4-5, the squad had done enough to join the boys, and become the County Cup Champions!

The girls were captained by Thongsbridge’s very own Georgina Jackson, whose determination and gritty approach no doubt helped pull the girls through this tough event. And, as in the boys’ squad, Thongsbridge contributed a girl to the team, in the shape of the talented Holly Horsfall.

It was a tremendous achievement, and will no doubt be inspirational for the younger age groups, with the 14 and unders due to compete in May. Let’s hope for more silverware coming back to Yorkshire! 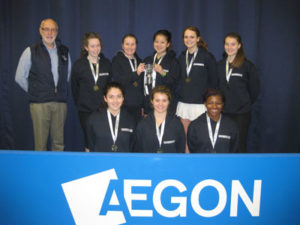