The half term school holiday is traditionally a busy tennis tournament period for all age groups. The young stars of Thongsbridge Tennis Club have again been in action all over the country. The holiday proved to be a fruitful time for Robert Sandiford. Robert moved up to the 10U age group in April and has been working hard on his game. He achieved his maiden tournament victory in the 10U Chesterfield Autumn Junior Open on 29 October 2013. Robert beat William Monk, Isaac Armstrong and Laura Monk without dropping a set to lift the winners medal. 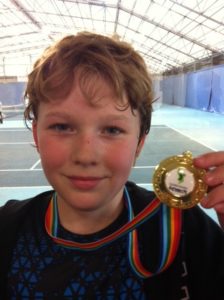 Barney Fitzpatrick was in fine form in the 12U boys Widnes Tennis Academy October Open. Barney only dropped one game on the way to the final, where he overcame Lancashire player Danny Urey 6:4, 7:5 to register a great victory. The tournament served as a good preparation for the 12U boys national tournament in Bath later in the week, where he represented the Thongsbridge Tennis Club together with Mathis Ross and Finn Murget. The boys played some excellent matches against the top players in the age group from all over UK, with Finn making the best progress and just losing in the last 16. This is a great achievement for a club from the Holme Valley!

The younger age groups were also well represented in various competitions. Manny Hesmondhalgh travelled to Shrewsbury to compete in the Shrewsbury Open 9U. His great progress in training was reflected in 2 good wins against tough opposition.

Charlotte Margetson was selected to represent Yorkshire girls in the 10 counties tournament in Corby. Charlotte just moved up to the 10U age group and she faced a difficult task playing against the best girls from Cambridgeshire, Essex and Hertfordshire. She did herself, the club and the county proud.