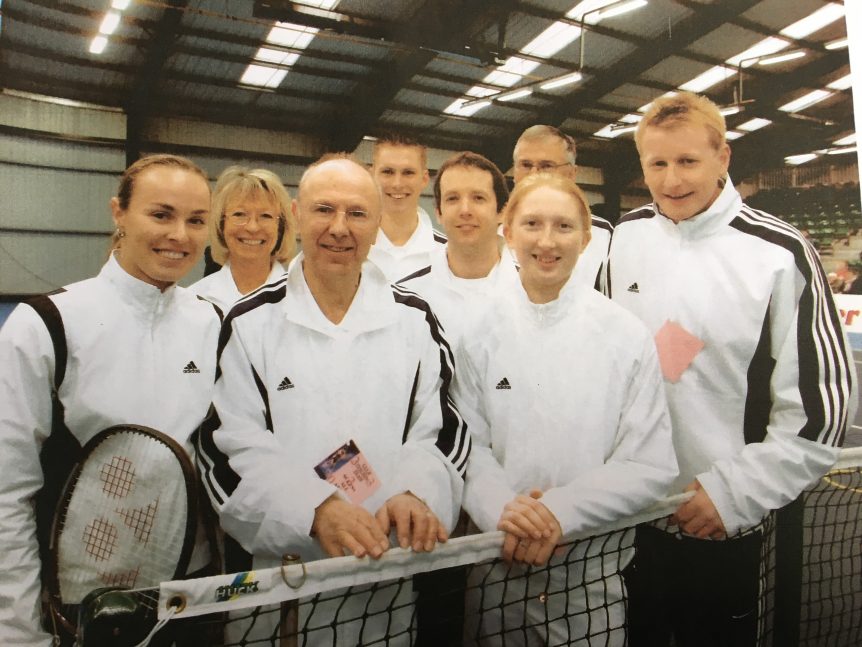 2005 – on 23rd February, the club welcomes to the first of its Northern Internationals, Martina Hingis, Fernando Verdasco, Ilie Nastase, Anne Keothavong, Peter Fleming, Andrew Castle, Sheffield’s Jonathan Marray, Peter Norfolk, gold medallist in the Athens Olympics of 2004, Halifax’s  Kevin Plowman and  Amanda Janes, daughter of Christine Trueman.  They are joined by Fernando Verdasco who, although injured and unable to play, has made a great effort to attend by flying in from Spain.

Adidas contact, Simon Cartwright, ex-member of the club, ensures that Martina jets in from Zurich to replace Tim Henman, who pulls out at the last minute.  The 5 time winner of grand slams says:

‘This is a fantastic place.  I can appreciate how much work it has taken by so many people to make it all happen’.

She finds it amazing that so many people are supporting the event and feels there is hope for tennis, saying ‘it’s not just the facilities.  It’s more the people the people who put in all the effort and support it’.  She hopes that one of the 600 children in the club’s coaching programme will be a future champion; she knows that it is important to give youngsters a chance as she started as a 2 year old.

Mike Adams recalls that Martina was great fun and very popular.  He also remembers that she had to have horse riding arranged and a night club booked in Manchester!  It seems that her mixed doubles partner was happy to look after her though! 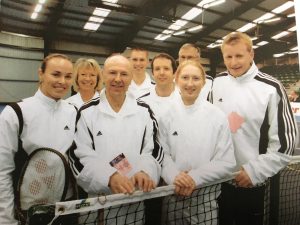 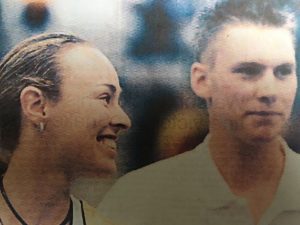 What are your memories of the first Northern International?

After many months of organisation, the event, organised by Mike Adams, Andrew Keast, Alan Cockman and Brian Harvey.

On the day, the weather is terrible with so much snow around and it is a nervous wait to find out what is going to happen with the pre-arranged helicopter flight bringing four players from Heathrow before learning that the flight has had to land at Luton because of bad

Andrew still fondly remembers the film-star-like landing in the snow and in 2016 sends love from the O2 to all for the Centenary celebrations!  He thinks it’s amazing to be greeted by so many people who are packed along the riverside and first notices the old clubhouse by the courts, declaring ‘What a fantastic transformation!  It is really quite outstanding!  You can really see the massive progress that has been made here.’

The injured Verdasco signs autographs in the clubhouse.

Are you one of the 2,000 who attended the event and did you get his autograph?

The order of play starts with a coaching clinic for Thongsbridge Juniors.

This is followed by a ladies singles match between Amanda Janes and Thongsbridge’s Danielle Brown, who has returned from a training camp in Florida, and then a men’s wheelchair singles between Peter Norfolk and Kevin Plowman.

Were you  lucky enough to be one of the juniors? 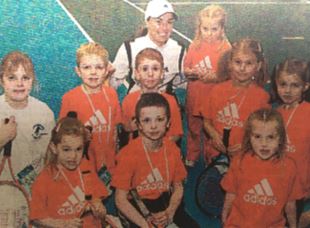 After an interval there is a mixed doubles featuring Anne Keothavong and Martina Hingis before a men’s doubles between Ilie Nastase and Johnathan Marray versus Andrew Castle and Peter Fleming.

Do you remember who won any of these matches?

The event is sponsored by Perry’s Jaguar, Adidas, Thwaites Brewery and the Examiner.  Tables of 10 are available for the ‘Court 4 spectacular experience’ in the sponsors village and include tickets, champagne and canapÃ©s on arrival, opportunities to meet the players and get photos and autographs, followed by a buffet meal after the event.

Pat Cash has plenty of headbands to give away.   Did you get one?  Do you still have it?

On this occasion, the event takes place over 2 days, the Friday session being devoted to Super-set (an intense one set-one winner competition that is the tennis equivalent of 20-20 cricket, with a razzmatazz-filled 30 minute or first to 6 games matches, including lights, smoke machines and rock music.)  Thongsbridge has been specially chosen to showcase the finals of the UK premier of the Under 21 Super-set tournament.  Saturday’s men’s final is won by Richard Irwin, British number 30, who defeats hard-hitting Edward Allinson, British number 52, in a tie break.  Afterwards, Irwin says he was lifted by the 1,500 strong crowd, who really got into the final, and he hopes everyone enjoyed themselves.  The ladies final is won by British number 6, Rebecca Llewellyn, who beats British number 13, Claire Peterzan, 6-1.  Llewellyn, 20, from Cardiff, is presented with a £1000 cheque by Coria who, despite being injured, and not being able to play, still has attended, commenting ‘This is a really good facility for tennis.

Children from Holmfirth and Honley schools are invited as spectators to this exciting, innovative format……..very noisy but exactly right for this style of tennis event.  Compering, Castle, who teams up with Bahrani for Saturday’s men’s exhibition, is full of praise, saying, ‘There are such a lot of activities for children nowadays that tennis has got to wake up and Super-set is like a breath of fresh air.  You can do all you want to tennis but at the end of the day it’s down to how exciting the matches are.’

Once again, Thongsbridge juniors enjoy a coaching clinic to begin the order of play on Saturday afternoon before a ladies singles and the Super-set finals.  Then, it is another memorable night, with Cash and Castle showing occasional glimpses of their glorious past, thundering down serves, delivering deft touches and stunning volleys.  After the event, Mike Adams receives e-mails from Andrew Castle and Mansour Bahrani who are full of praise and say ‘thank you’ for such a good time that they have enjoyed.  Bahrani reveals that he would love to come back, an overwhelming endorsement for the club.  Castle is delighted to have been involved and says that if he did not live down south then he would quickly become a member at Thongsbridge as it is such a friendly, breath-of-fresh-air club.

At the end of the evening a dinner dance is held under a marquee on courts 10 & 11.

Did you attend this fitting finale to the event?

In addition to having the opportunity to see these wonderful international players, several of them former world number ones and grand slam champions, Thongsbridge has produced its own junior players who have gone on to attend international coaching venues –

1997 –    Megan Hughes still the youngest ever at 14 to play in the Yorkshire Senior County Squad – goes to Milledgeville, Georgia.